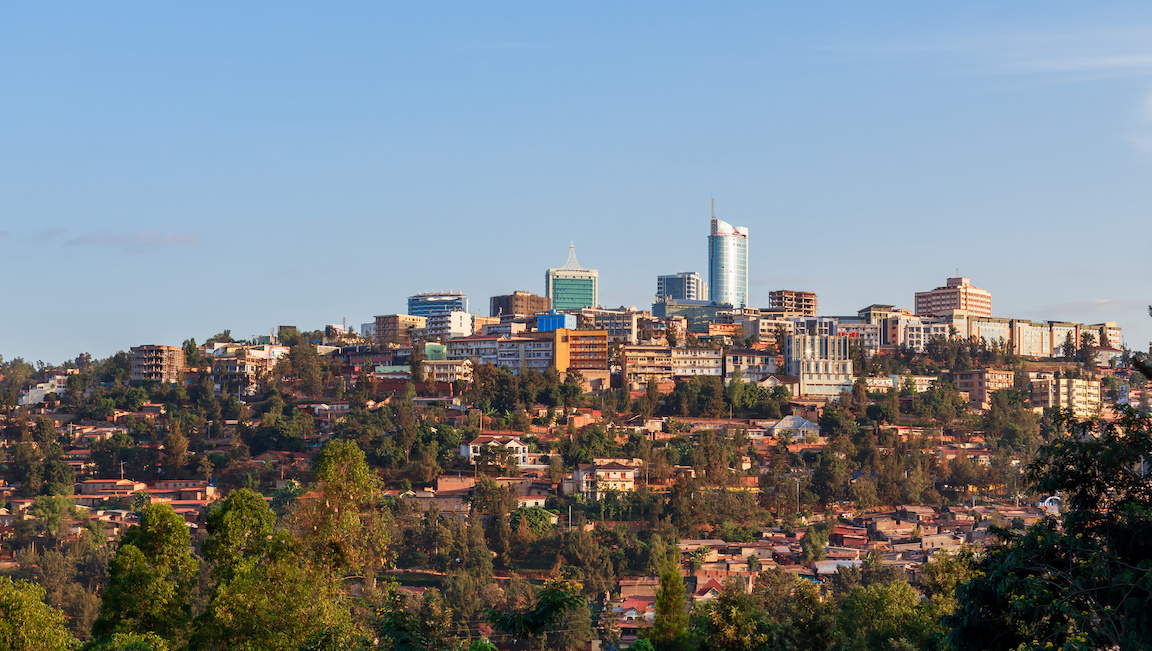 Small and landlocked, the Republic of Rwanda is a hilly and fertile land with a population of about 13 million (2020). Known as the “land of a thousand hills” in the Great Rift Valley, it borders the far larger Democratic Republic of the Congo (DRC) in the West, as well as its East African neighbours, Tanzania, Uganda, and Burundi.

Rwanda has guarded its political stability since the 1994 genocide with a Parliament currently composed of 61% women parliamentarians. The ruling party, the Rwandan Patriotic Front maintains the absolute majority in Parliament and President Paul Kagame, after amending the Constitution, is currently serving his third term since he assumed office in 2000. However, ongoing tensions along the border with the DRC are risking the stability and prospects for peace in the region.

Economically speaking, Rwanda aspires to become an upper middle-income country by 2023 and a high-income country by 2050 through its National Strategies for Transition (NST) and its Vision 2020 which now converted into Vision 2050, with the goal set to transform Rwanda, thanks to economic growth and prosperity and high quality and standards of life, into an East African hub with a modernised agriculture, knowledge-based industry and services.

Prior to the COVID-19 outbreak in early 2020, Rwanda’s economic growth exceeded 10% in 2019, driven mainly by large public investments in implementation of the NST. In 2020, however, the lockdown and social distancing measures, critical to controlling the COVID-19 pandemic, negatively impacted economic activities as GDP fell by 3.4%, the first major drop since 1994. However, GDP growth is expected to reach 6.9% and 7.9% in 2022 and 2023.

The Rwandan economy is heavily depending on large public investments which are financed mostly through external financing, notably by multilateral donors. Consequently, its public debt significantly increased in recent years. The debt-to-GDP ratio rose to 56.7% in 2019 (from 19.4% in 2010) and was estimated to have reached 71.3% of GDP in 2020, following an increase in borrowing needs due to the pandemic. The private sector looks set to play a bigger role in helping to ensure economic growth. However, the small size of the domestic market, low domestic savings, a shortage of skills, and the high cost of energy (the most expensive electricity in East Africa) are some of the major constraints to private investment.

Overall, Rwanda’s main structural challenges are an increasing foreign debt, a constant deficit in the balance of payments (with agricultural exports constantly decreasing), very modest industrialisation, a small formal sector, high unemployment or underemployment of at least 40% of the labour force, increasing inequality between the upper 10% and the rest of the population (although inequality has decreased at the community level and across the ethnic divide) and high dependency on foreign aid. Sustaining strong growth in the long term will depend on the country's ability to address these structural challenges.

Rwanda has made substantial improvements in terms of health and living standards, with a two-thirds drop in child mortality and near-universal primary school enrolment. Poverty declined from 77% in 2001 to 55% in 2017, while life expectancy at birth improved from 29 in the mid-1990s to 69 in 2019.

Luxembourg’s intention to renew the cooperation between both countries has been expressed by the Minister for Development Cooperation and Humanitarian Affairs, Franz Fayot, during his visit to Kigali in October 2021 in the framework of the African Microfinance Week. Indeed, the first project implemented by the Luxembourg Cooperation in Rwanda dates back to 1989 in the health sector. Other sectors targeted by the Luxembourg intervention were rural development as well as education and vocational training. The Luxembourg Cooperation had finalised the disengagement of its bilateral cooperation with Rwanda after 25 years of presence in the country in late 2013.

From 2022 onwards, the Luxembourg Cooperation will focus its activities mainly in the following three sectors: technical and vocational training, environment, and inclusive and innovative finance. Meanwhile, human rights, good governance, gender equality and digitalisation are transversal priorities on which the Luxembourg Cooperation will focus in all its future projects; other projects specifically dedicated to these four priorities will also be launched.

Additionally, a roadmap and an action plan on how to support Rwanda in the development of the Kigali International Financial Center (KIFC) are currently being elaborated by the Luxembourg Cooperation, following the signature of a Memorandum of Understanding in 2021 between Luxembourg’s Minister for Development Cooperation and Humanitarian Affairs, Franz Fayot, and Rwanda’s Minister for Finance and Economic Planning, Dr. Uzziel Ndagijimana. In line with the objective outlined in Luxembourg’s General Cooperation Strategy - to reduce poverty through the use of innovative and inclusive financial instruments - the roadmap aims to identify ways in which Luxembourg could support Rwanda in developing sustainable and impact finance, a FinTech ecosystem, as well as capacity development in these areas. The finalised roadmap and its action plan are expected at the beginning of March 2023.

As of September 2022, the LuxDev country office has been set up to be fully operational in 2023.

All projects in Rwanda