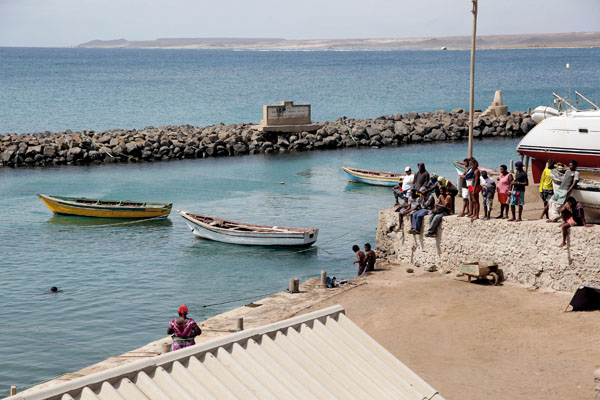 Cabo Verde is an archipelago consisting of a dozen islands (volcanic in origin) in the Atlantic Ocean off the coast of Senegal. The capital, Praia, is part of Santiago Island, which is the largest island and home to the biggest share of the country’s population.

Although most of the islands have a rugged terrain consisting of volcanic soil, others are flat and sandy with scant vegetation and a hot, dry climate. Annual rainfall is approximately 230 mm in Praia, although other islands have even less rain, with the result that surface and drilling water resources are very limited and vegetation is generally scarce. The islands of Santo Antão and São Nicolau are, to some extent, an exception on the north-eastern side, which is more exposed to the moisture from the ocean. Although the connection rate to the water network is very high in Cabo Verde, covering the needs of the population and contamination of the scarce resources are real challenges for the future.

These uninhabited islands were discovered and colonised in the 15th century by the Portuguese. Cabo Verde then became an important hub in the African slave trade and later a refuelling stop for whaling and trans-Atlantic navigation. After independence from Portugal in 1975 and an attempt at unification with Guinea-Bissau, a one-party system was established and maintained until multi-party elections took place in 1990. Cabo Verde can subsequently boast to having one of Africa’s most stable democratic governments; the next elections are scheduled to take place before the end of 2016.

In spite of heavy constraints and limited potential regarding natural resources, Cabo Verdehas made genuine progress in terms of economic growth over the last 15 years. Real GDP per capita recorded one of the largest increases among sub-Saharan countries, rising from USD 902 in 1990 to USD 3 700 in 2008 and USD 6 300 in 2014. These increases, however, were broken by the economic crisis. A substantial part of the economic fabric is devoted to tourism (25% of GDP).

Cabo Verde’s growth has been possible thanks to an economic development strategy based on the private sector and the country’s integration into the global economy. However, this strategy has been strongly induced from abroad: the transfer of funds from Cape Verdean emigrants (9% of GDP), foreign aid and tourism revenue. Moreover, Cabo Verde’s trade balance is very uneven, being 4 to 5 times higher than the country’s total exports.

The good performance in terms of growth is also reflected in an Human Development Index which, in 2014, placed Cabo Verde in 122nd position out of 187 countries. Moreover, Cabo Verde is no longer ranked in the group of least developed countries: in 2007 it joined the list of middle income countries.

Cabo Verde is, however, still fragile: the economy is vulnerable and highly dependent on foreign aid, and poverty is on the rise. In 2007, 26.7% of the population was considered poor, with half living in extreme poverty. The official unemployment rate is approximately 20 %, and the poor are hit hardest. In this context, the cooperation programmes between Cabo Verde and Luxembourg in support of vocational training and employment make complete sense, especially in the dynamic tourism sub-sector.

Cabo Verde has been a partner country of the Luxembourg Development Cooperation since the late 1980s, and a General Cooperation Agreement was signed as far back as 1993. The first ICP was entered into in January 2002 to define the cooperation relationship between Cabo Verde and Luxembourg. The first interventions focused on water, secondary and technical education, and health. Today, the programme carried out by LuxDev in Cabo Verde concentrates on vocational training and jobs as well as sectorial support for water and sanitation. In the new ICP negotiated in 2014, it was also planned to support national programmes for developing renewable (solar and wind) energy, which have genuine potential at a time when countries are still devoting many resources to importing fossil fuels for producing electricity.

Evolution of activities in Cabo Verde (in thousand EUR)

All projects in Cabo Verde