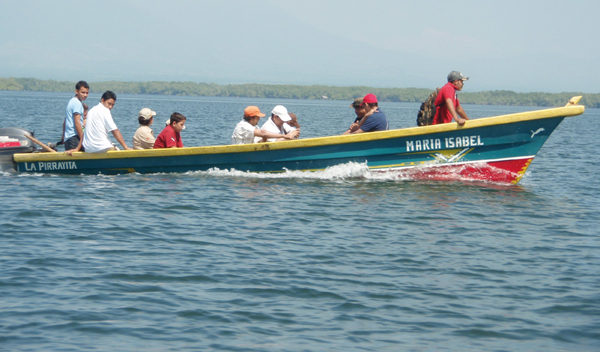 Known as the land of volcanoes, El Salvador is home to numerous active volcanoes and is frequently subject to sometimes-deadly earthquakes. The country, which shares its borders with Guatemala and Honduras, is largely mountainous with a narrow coastal strip open to the Pacific Ocean and a central plateau. El Salvador is separated from Nicaragua by the Gulf of Fonseca. The climate is tropical, and the territory is regularly exposed to hurricanes.

El Salvador has been independent from Spain since 1821, and left the fold of the United Provinces of Central America in 1839. The country’s recent history has been marked by a civil war lasting 12 years, which came to an end in 1992 with 75 000 dead. The country subsequently saw a democratic transition, with the last presidential elections held in early 2014. Nevertheless, El Salvador is still faced with problems of violence and has a very high homicide rate, with 70 deaths per 100,000 inhabitants a year in recent times.

The population of El Salvador grew from 1.9 million in 1950 to 4.7 million in 1984, and was estimated at approximately 6,125,000 in 2014, meaning that there is a particularly high population density given the country’s small size (21,041 km2). The population is mostly made up of mixed race, a mixture of indigenous Amerindians / European descent, and indigenous peoples. 66% of El Salvador’s population lives in towns, and almost half consists of young people under 24 years.

In spite of its small size, El Salvador boasts one of the largest economies in Central America: it has the region’s fifth largest economy based on GDP per inhabitant (USD 8,000 in 2014). However, the economy suffered greatly in the 2008 global recession, although it began a slow process of recovery in 2010 thanks to greater political stability, improved exports and increased remittances sent by Salvadorans living abroad. Remittance flows accounted for 16 % of GDP in 2014, and approximately a third of all households benefit from these transfers. The migration rate is still high at 7.1 emigrants for 1,000 inhabitants.

In 2006, El Salvador was the first country to ratify the Dominican Republic - Central America - Free Trade Agreement with the United States, which boosted exports of food, sugar and ethanol. The agreement also supported investment in the textile industry in the face of increasing competition from Asia and the expiry of the Multi-Fibre Arrangement in 2005. El Salvador has favoured an opening of its economy and improved the investment climate by launching a wave of privatisations from telecommunications to electricity distribution, and from banks to the management of pension funds.

With the adoption of the US dollar as the official currency in 2001, El Salvador lost control of its monetary policy; any counter-cyclical political answer to the crisis has to be implemented through fiscal policy, which is limited by legislative requirements and the already high level of debt.

Evolution of activities in Salvador (in thousand EUR)

All projects in Salvador