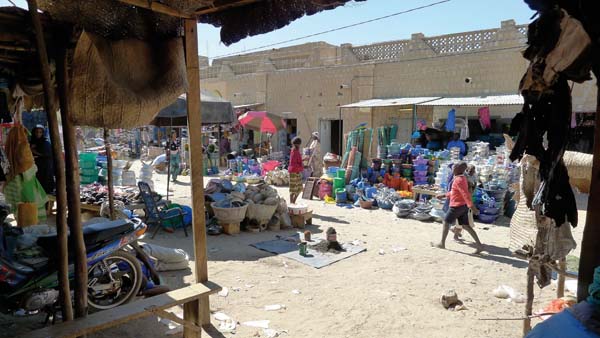 Mali is a large country, two-thirds covered by desert areas, which shares borders with seven other countries. The country suffers from many geographical handicaps: landlocked and strongly dependent on climate variations, (drought, locust infestation, desertification and deforestation), inadequate infrastructure and lack of clean water.

Three-quarters of Mali’s population lives in a rural environment, as compared with 27% in an urban environment. Approximately 80% of the workforce works in the agriculture or fisheries sector. Mali is cross-roads of civilisations with its many ethnic and linguistic groups, each constituting a source of cultural wealth. A secular country under its constitution, Mali is characterised by the peaceful coexistence of monotheistic religions and traditional cultures. The religions practised are Islam, Christianity and animism.

Mali’s population is very young, with half of Malians aged under 15 (47%). As a result, there is a strong pressure in relation to job creation and migration, in a context of worsening conditions on the labour market. Growing urbanisation is encouraging political and administrative decentralisation.

A country which has historically had some major migrations internally, within Africa and internationally, Mali is a country with a strong tradition of emigration. All the regions in Mali are areas from which emigration takes place. The diaspora of Malians abroad represents nearly four million people, which is a quarter of the population. African countries are still the main destinations, with 32% living in Ivory Coast and roughly 1 million in the Economic Community of West African States, followed by the European Union (500 000 Malians). In terms of financial support for the development of the country (nearly 300 billion FCFA per year, i.e. 457 million EUR per year), migration is on such a large scale that a Ministry for Malians Abroad has been created in order to recuperate investments, added skills and relations and to manage the reintegration of Malian nationals returning to the country.

The Malian economy is based primarily on four sectors: cotton, rice farming, and gold mining. Therefore, the country is dependent on world prices for cotton and gold. From the point of view of external financing, the country depends heavily on foreign aid and remittances from emigrants.

Mali has been going through a period of great instability and conflict since the military coup of 2012 and the occupation of the north by armed groups. The whole of northern Mali fell to the Tuareg rebels of the Mouvement National de Libération de l'Azawad (MNLA) and then to the Islamist group Ansar Dine (Defenders of Islam) and the Movement for Unity and Jihad in West Africa (Mujao), allies of Al-Qaeda in the Islamic Maghreb. The United Nations Multidimensional Integrated Stabilisation Mission in Mali (MINUSMA) has been active since July 2014

In August 2020, Ibrahim Boubacar Keïta, president since 2013 and re-elected in 2018, was overthrown by a military coup, after several weeks of demonstrations. Bah N'Daw became president of the transitional government and a National Transitional Council, acting as the National Assembly, was set up.

Eight months later, in May 2021, during a new military coup, Bah N'Daw was arrested and had to give up power under pressure from the army. Since then, the military Assimi Goïta has officially taken over the leadership of Mali.

Theoretically, presidential and legislative elections are scheduled for the end of February 2022. On that date, the transition should also end.

Evolution of activities in Mali (in thousand EUR)

All projects in Mali