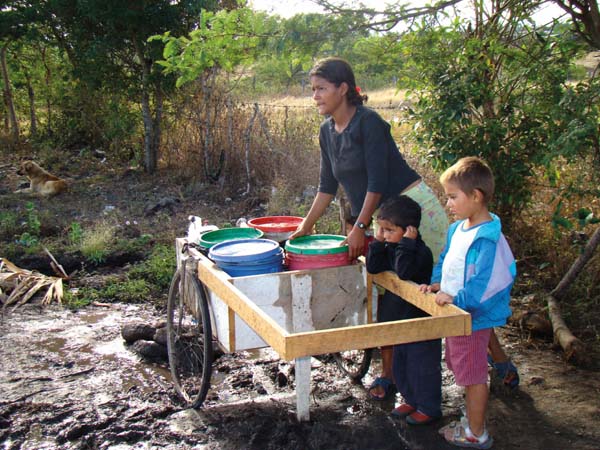 Nicaragua is the largest country in Central America with an area of 129 494 km2. It has two coasts on the Pacific Ocean to the west and the Caribbean Sea to the east. Its climate is tropical in the coastal plains and cooler in the mountainous northern areas. The Pacific coast is bordered by a chain of volcanoes, some of which are active. Nicaragua has two important freshwater reserves, Lake Cocibolca and Lake Xolotlan. The country is located in an active tectonic zone which makes it vulnerable to earthquakes and the Caribbean coast is exposed to hurricanes.

Nicaragua was colonised by Spain in 1524 and gained independence in 1821. After being part of the United Provinces of Central America, it became a sovereign republic in 1854. Its early history was marked by military interventions by the United States, particularly because of the possibility of digging a canal between the two oceans. The country was also troubled by long periods of military dictatorship, the last of which, dominated by the Somoza family, ended in July 1979 with the emblematic victory of the revolution led by the Frente Sandinista de Liberación Nacional.

After 1979, the country led by the Frente Sandinista de Liberación Nacional and its leader Daniel Ortega lived through a difficult period with a US embargo and the internal war with the US-funded "la Contra". The 1990 elections saw the victory of Violeta Chamorro and paved the way for the gradual stabilisation of the country with free elections and political alternation. After 15 years in opposition, the Frente Sandinista de Liberación Nacional returned to power in 2006. The next presidential elections will be held in November 2021.

Nicaragua is one of the poorest countries in Central America with a GDP of USD 2,029/capita in 2018. Agriculture, livestock, forestry and fishing account for 18% of GDP and trade for 11%, followed by manufacturing (15%). Beef, coffee, gold, sugar and groundnuts account for 60% of total exports. Tourism is also an important source of foreign exchange and accounts for 17% of exports. About 10 % of GDP is contributed by emigrants sending money back to their families.

Public spending in the education sector accounted for 4.4% of GDP in 2017 and in the health sector for 5.2%.

Furthermore, Nicaragua's economy is heavily reliant on the informal sector, which employs 75% of the workforce, many of whom have not had the opportunity to complete the compulsory six years of primary education.

This is one of the reasons why cooperation efforts between Luxembourg and Nicaragua are focused on the vocational training and integration sector and on the promising tourism sector. This makes it possible both to develop training with the assurance that it meets the needs of workers and companies and to strengthen economic activities linked to tourism, which can be considered a tool for local development, both in urban and rural areas.

Nicaragua has been a partner country of Luxembourg Cooperation since the 1990s and a General Cooperation Agreement was signed in 2000. The first ICP was drawn up in 2003, which progressively enabled interventions to be better structured. As soon as the second ICP was signed in 2007, the sectors of training and professional integration, tourism and health were identified as focal sectors and have remained so to this day.

The year 2014 was marked by the identification of new programmes and the negotiation of an amendment which provides for the extension of the ICP III over a period of three years in order to ensure the transition to a joint programming modality with the European Union from 2018.

Evolution of activities in Nicaragua (in thousand EUR)

Distribution of the 2020 disbursements by sector